In April 2011, the ATI team and ONDCP Deputy Director of Office of State, Local and Tribal Affairs Ben Tucker, traveled to Houston as part of the continuing focus on engaging local communities. As a winning city of an ATI online community engagement activity, the Campaign partnered with the Coalition of Behavioral Health Services Houston (CBHS) to engage Houston youth in a series of activities leading up to “ATI Day” at the Woodlands Waterway Art Festival. Throughout the week, CBHS and its partners led more than 350 teens from across the Greater Houston Metro area in “Tag It” and caught the attention of their local newspaper, The Memorial Examiner. In addition, more than 175 Houston area teens, with support from ARTreach, a local not-for-profit arts education organization, created an “influence inspired” mural for an unveiling on “ATI Day.”

“ATI Day” at the festival featured a show by URGEWORKS, an inspirational hip-hop performance group, and a revealing teen panel discussion in which Deputy Director Tucker engaged with teens and listened to what they had to say about influence, drugs, and other risky behaviors. At the conclusion of the discussion, teens unveiled their “influence inspired” mural that has traveled around the Houston area since April 2011 and will find a permanent home at the Memorial City Mall in February 2012.

CBHS and its partners also hosted an ATI exhibit in the Student Art section at the Woodlands Waterway Art Festival, where teen festival goers had the opportunity to contribute to a second influence-inspired mural. The completed mural was unveiled before a large crowd of community leaders and youth at the opening night of the Spotlight Gallery at the Woodlands Mall on Sept. 14, 2011. The mural will be on permanent display in the gallery, which features works created through a partnership of The Woodlands Mall and Because Art Matters! (BAM!), the community outreach arm of The Woodlands Waterway Arts Council.

“ATI Day” at the Woodlands Waterway Art Festival was made possible through support from partners such as CBHS, the Woodlands Waterway Arts Council, ARTreach, the Bay Area Council on Drugs and Alcohol, the Council on Alcohol and Drugs Houston, Change Happens!, Volunteers of America Texas, We Care Treatment Center, and other community partners. “ATI Day” also had the support of local community leaders such as the Chairman of the Woodlands Township and Superintendent of Conroe Independent School District.

Marion Burch (left) and Larry Mullins of Memorial City Mall check out the Above the Influence mural at what will be its permanent home inside the mall, near Cinemark Theater. The Coalition of Behavioral Health Services partnered with the White House Office of National Drug Control Policy, ARTreach, and master artist Vickie McMillan to have an anti-drug mural created by 200 teens in and around Greater Houston as part of the Above the Influence media campaign, designed to build influence-literacy by increasing teens’ awareness of influences in their environment and how influences may prompt them to make decisions, both positive and negative.

On April 9-10, CBHS and its partners also hosted an ATI exhibit in the Student Art section at the Woodlands Waterway Art Festival, where teen festival goers had the opportunity to contribute to a second influence-inspired mural. This mural is now on permanent display at The Woodlands Mall 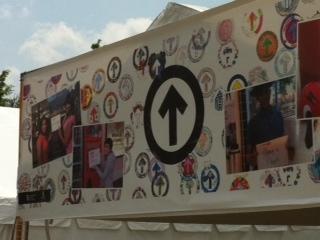 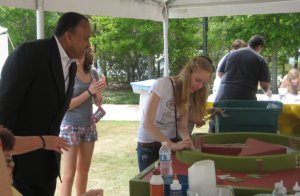 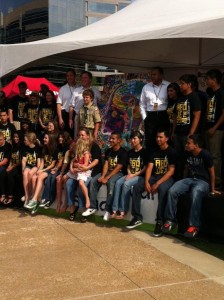