In recognition of an ATI online challenge – designed to engage teens across the country in a discussion on influence – the ATI team traveled to Phoenix, AZ, for a series of youth-driven events. The first stop was the 2010 Arizona SADD conference, where more than 800 youth attended and executed the ATI “Tag It” activity on site. Teens were split into two groups of 400 each, and were given 10 minutes of instruction on how to implement “Tag It.” Each group of teens was given 15 minutes to put their skills and creativity to the test for their “tags” in a large conference space that was nearly bare. The teens’ “tags” were then displayed on a live Flickr slideshow that was prominently displayed on a massive wall in the venue.

Ben Tucker, White House ONDCP Deputy Director of Office of State, Local and Tribal Affairs, also engaged with these teens in an open forum at the closing ceremony and listened to what they had to say about influence, drugs, and other risky behaviors.

Additionally, the ATI team collaborated with the COPE Coalition and their partner, Las Artes de Maricopa, to bring ATI to the First Friday Art event in downtown Phoenix. Teen artists from Las Artes created a five by five foot canvas of the Above the Influence symbol and unveiled their unique expression at the art event in front of their peers, counselors, and other community organizers. A discussion on “influence” was the center piece of this art event, and the teen artists shared their inspiration on why they chose their design. Youth who attend Las Artes participate in a variety of art projects to help address academic, social and emotional needs, and the organization’s core focus is on GED completion, advanced training, and/or employment. 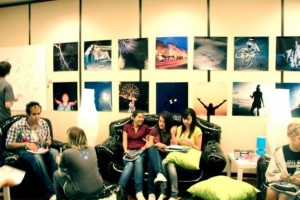 Youth at the AZ SADD conference discussing influence in the ATI Lounge. 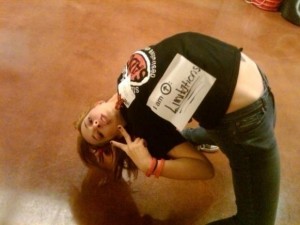 Teen at AZ SADD Conference expressing that she is above limitations. 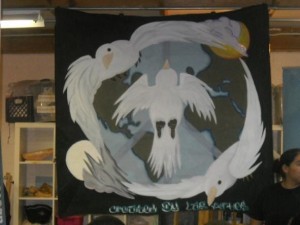