The City of Douglasville was the winner of a recent ATI online community engagement activity designed to empower local youth to stay above the influence. Ben Tucker, Deputy Director of State, Local, and Tribal Affairs for the White House Office of National Drug Control Policy (ONDCP), and the ATI team partnered with Douglas C.O.R.E. (Community Organizing Resources for Excellence) to host a free ATI event for local teens at the annual Taste of Douglasville festival on Saturday, May 14, 2011.

At the Taste of Douglasville, the ATI booth was an interactive teen-friendly environment where youth had an opportunity to participate in any of the three “Tag It” sessions led by local youth-serving partners. Teen festival goers who participated in “Tag It” were able to print and add their favorite “Tag It” images to an ATI photo collage that will eventually go on permanent display at the Douglas C.O.R.E. youth center. At the end of the day, Deputy Director Tucker engaged with teens during a panel discussion and listened to what teens had to say about the dangers of drugs and risky behaviors, the power of influence, and what keeps them above the influence.

Amanda Bryant, Executive Director of Douglas C.O.R.E. has expressed that the ATI campaign created a movement among Douglas County teens around the issues of peer pressure and living truly above the influence. Douglas C.O.R.E. expects more than 700 youth to participate in ATI events during the months of September through November 2011. 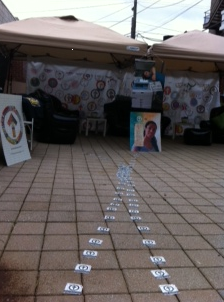 ATI booth at the Taste of Douglasville.