For the second year in a row, The Kips Bay Boys and Girls Club in Bronx, NY has implemented “Above the Influence” toolkit activities and themes in their character development and health Club programming.

The Club nominates youth ages 14-18 to serve as their local ATI team.  During a seven-week employment program, they planned and hosted a series of ATI events, including an ATI Girls Self Esteem Weekend sponsored by Dove brand soaps, for their peers, promoting healthy/safe fun at times when teens are most likely to engage in negative behaviors.

Their belief in living “Above the Influence” is such that a large ATI mural is displayed at the entrance of the clubhouse, designed by one of the club teens.  Last month, they had the honor of having former New York Knicks great, Walt Frazier, visit the club.  The teens talked with him about the ATI campaign and had him pose in front of their ATI wall. 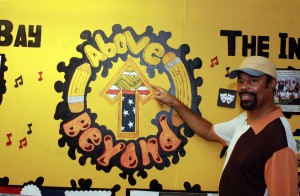 Read more about other ATI-themed youth activities implemented in the Bronx,  including a “Stop Bullying — Speak Up” town hall meeting to discuss the importance of remaining above negative influences, such as bullying.

Submit your story on how teens are using “above the influence” in your community!