Building on the ATI messages of identifying positive and negative influences/challenges specific to their community, Jacqueline Zeledon, communications manager, and her team at the Boys & Girls Clubs of Greater Milwaukee identified and formed an alliance with a fellow youth-serving organization, Milwaukee Reality Check Coalition (MRCC), to tackle the ongoing and prevalent drug messages near homes and schools in the Lindsay Heights neighborhood.

To combat tobacco and alcohol advertisements in a local neighborhood, the two groups pulled together teens from their organizations, schools, and churches within the community to create a teen-inspired mural designed to overshadow the alcohol and tobacco advertisements in Lindsay Heights. The groups raised the profile of their teen-driven efforts in the community by holding a press conference to officially unveil the mural entitled, “The Community Empowerment Mural.”

In March 2011, youth from Boys and Girls Clubs of Greater Milwaukee and MRCC participated in “Tag It” to counter the negative attention a group of teens caused at the Mayfair Mall earlier in the year. Youth gathered at Mayfair Mall to discuss influence and broke up in smaller groups to “tag” influences around the mall. The responses to the activity were overwhelmingly positive. The teens that participated in “Tag It” felt that the activity helped them recognize the influences not only affecting their decision-making process, but that of their peers as well. 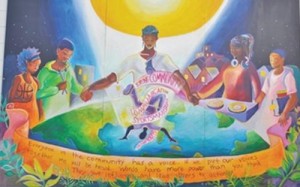 The Community Empowerment Mural unveiled by the Boys & Girls Clubs of Greater Milwaukee in partnership with the Milwaukee Reality Check Coalition (MRCC) in the Lindsay Heights neighborhood.