ONDCP Teams Up with the Kent County Prevention Coalition for the “Above the Influence” Youth Summit in Grand Rapids, Michigan

In April 2012, the Office of National Drug Control Policy (ONDCP) teamed up with the Kent County Prevention Coalition (KCPC) for the first ever Kent County Above the Influence (ATI) “Live Out Loud: Dream IT, Believe IT, Achieve IT” Youth Summit. This two-day summit brought together more than 600 middle and high school students from across the Kent County, MI, area to think critically about the issues that stem from negative influences, including drug and alcohol use. ONDCP Deputy Director of State, Local, and Tribal Affairs Benjamin Tucker was in attendance to participate in the event and learn how Kent County teens stay ‘above the influence.’

Partnering with ATI helped the Youth Summit create a teen-friendly environment for talking openly about critical issues they face in their community. A key component of the youth summit was the KidSpeak “listening panel,” which gave 20 Kent County student representatives the opportunity to speak directly to the Mayor of Grand Rapids, George Heartwell, local youth prevention leaders, the Chief of Police, Kevin Belk, and to State Representative Dillon Brandon, as well as to other community leaders, about the issues related to drug and alcohol use that impact them.

Kathy, a freshman from Whitehall High School, testified in front of the panel and emphasized the important role friends and family play in teens’ decisions to make good choices when it comes to drugs and alcohol. She also expressed concern for her friends who have little support at home saying, “It’s hard for teens to stay above the influence because they think nobody cares.”

Throughout the summit, youth engaged in group discussions and ATI activities, including “Tag It” and “Be It.” All ATI activities were designed to help students think critically about the pressures they face to use drugs and alcohol, and the power they have to impact their peers, families, and communities. These activities can serve as the basis of an entire event or be used as thought starters.

At the Youth Summit, ONDCP also presented an award to one of the students in attendance, Thalia Vega, who participated in ATI’s most recent “Be It” challenge.  Thalia’s slogan, “Let your heart do the speaking,” has been featured on billboards throughout the Grand Rapids, MI, area and highlights the creativity the ATI campaign continually sees from its community partners. 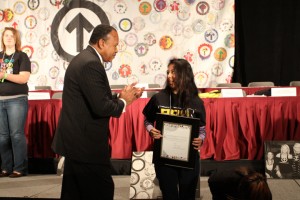 Deputy Director Tucker enjoyed being part of the Youth Summit where he discussed the Above the Influence campaign and its role in helping drug-free community groups like KCPC engage with teens in a positive and productive manner. Event coverage was captured by ABC’s WZZM 13 in Grand Rapids, PBS’s WGVU Radio, CBS’s WWMT, Mlive, and Fox 17.

Shannon Cohen, Coordinator of the Kent County Prevention Coalition, explains, “This conference really got our youth excited about making positive choices. This isn’t your grandfather’s typical ‘drugs are bad!’ lecture; it’s about giving teens something to walk away with on a more personal level.”